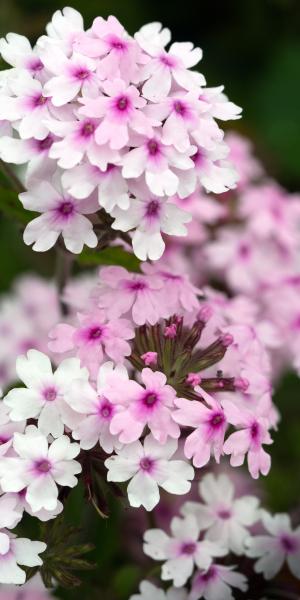 'Margaret's Memory' produces a profusion of large flower heads throughout the summer. Each individual flower has a strong, dark pink centre which slowly fades outwards through lilac to light pink with the outermost flowers appearing almost white.

This VERBENA or Glandularia as it is now known, is a short lived perennial but unlike it's more familiar counterparts is hardy and will survive all but the harshest of winters.

Any reasonably good soil is perfect for this perennial, it will be happy in either full sun or part-shade. Great for the front of your beds and borders or for gravel gardens

Glandularia  'Margaret's Memory' was named in memory of the late Margaret Seabrook, wife to gardening correspondent, Peter Seabrook. Margaret lived with dementia and Alzheimer’s for many years, so this delightful, new cultivar is a fitting tribute to Margaret.

For each and every plant of 'Margaret's Memory' that we grow and sell, a donation will made to the Alzheimer’s Society, supporting those with dementia plus seeking new treatments and ultimately a cure for the devastating condition that affects over 1 million people in the UK.  The cultivar was a chance discovery, a “sport” from the well-known ‘Seabrook’s Lavender’ (a hardy Verbena to –10 degrees centigrade), by Robin and Christine Grant on the Isle of Wight.